On May 30, 2011, my family and I attended the 144th Annual Memorial Day Parade in Gettysburg (after the boys marched as Cub Scouts in the Carlisle parade).  While it was EXTREMELY hot that day, I had a terrific time with the family touring the battlefield and watching the parade.

You can check out some of the videos that we took on my Teaching the Civil War with Technology blog.

The Memorial Day Parade in Gettysburg is extra special because for the past several years, one of the local businessmen has sponsored a bus to bring wounded soldiers from Walter Reed Hospital to Gettysburg to tour the battlefield and watch the parade.  This year was no exception and the bus arrived with numerous wounded soldiers and their families.  As they stepped off the bus, everyone in attendance were standing and applauding these brave men and women of our Armed Forces.

While we were waiting for the parade to begin, a woman arrived with her two young daughters to watch the parade.  The one little girl held a sign that said “We Love You Daddy”.  When I asked the mother if her husband was going to be in the parade, she said no and told us that her husband was in Kandahar.  Here is where this gets really cool.  Near where we were standing is a traffic light with a web camera mounted on top.  This traffic camera streams video of the intersection where we were standing over the web via the Pennsylvania Department of Transportation’s website.  So, the father of the two girls who was thousands of miles away, could watch the Memorial Day Parade AND see his family.  He even sent the mom a message while we were standing there saying that he saw the girls and their sign. 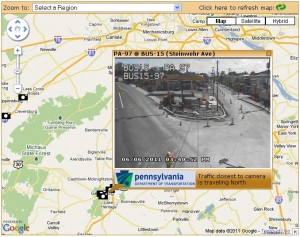 Thank you to all the men and women (and their families) of the Armed Forces who protect our country.

Category: Blog
Disclosure: Please note that some of the links on this site are "affiliate links," and at no additional cost to you, I will earn a commission if you decide to make a purchase. Please understand that I have experience with all of these companies, and I only recommend them because they are helpful and useful, not because of the small commissions I make if you decide to buy something. Please do not spend any money on these products unless you feel you need them or that they will help you achieve your goals. I am disclosing this in accordance with the Federal Trade Commission’s 16 CFR, Part 255: “Guides Concerning the Use of Endorsements and Testimonials in Advertising.” Read my complete Affiliate Disclosure.